Review: In ‘Now What?,’ essays from Scaramucci, Sharpton et al. weigh in on post-Trump America 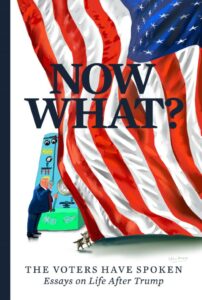 “Now What?: The Voters Have Spoken — Essays on Life After Trump”

On Nov. 7, I woke up around 8 a.m., grabbed my phone and saw Jake Tapper tweet a hint that CNN was readying to call Pennsylvania. I ran to the living room, turned on the TV and started flipping among networks while refreshing news websites on my laptop. I was watching MSNBC with my husband when they said Joe Biden had won the 2020 presidential election. I cried tears of relief.

The anxiety of those days between the Nov. 3 election and the race being called — and of the past four years of Donald Trump’s mad rule — is captured in an extraordinary new book, “Now What? The Voters Have Spoken — Essays on Life After Trump.”

Thirty-eight contributors — a mix of writers, athletes, politicians, actors, lawyers and activists, some famous, some not — weigh in on this most consequential unknown — what happens once Trump leaves office. It was riveting to read these raw, immediate reflections by everyone from the Rev. Al Sharpton to Anthony Scaramucci, who famously served only 11 days as White House communications director. This will be an important reference text for future generations trying to understand this moment in history.

“The hope is that in putting out these glimpses so quickly, giving them an immediacy unusual in book publishing, we can help in the mourning for all that has been lost, help in the healing (of ourselves and our country), and … give new life to our democracy,” Steve Kettmann, the collection’s editor and co-founder of the Wellstone Center in the Redwoods, writes in his introduction.

“We stared into the abyss, tottered on the edge, and a record-setting surge of voting and activism delivered us from the very real threat of plunging into autocracy. We have to celebrate that deliverance and remember it,” he adds.

It was honestly hard for me to remember it, reading the book as I did after the deadly Capitol riot of marauding Trump supporters on Jan. 6 and as defense officials fretted about a possible insider attack on the inauguration. My daughter’s fourth-grade teacher was so alarmed at the prospect of a possible televised assassination attempt that she scrapped plans to have them watch the ceremony.

Still, I took comfort in seeing the through lines in the essays. How many felt the joy of Biden’s victory coupled with the jarring dismay of seeing 74 million Americans (including 57% of all white voters) cast their vote for Trump despite his relentless lying, racism, cruelty and incompetence in fighting a pandemic that has now killed roughly 400,000 Americans.

Many felt the same physical lightness of Nov. 7. Actress Rosanna Arquette remarked, “We’re all in a collective state of PTSD. We have to recover from the trauma. Donald Trump the abuser.”

Political pundit Keith Olbermann discovered he “didn’t have asthma and there was another fraction of an inch in my lungs that had evidently closed off from stress.” Joan Walsh, the Nation’s national affairs correspondent, writes, “It’s as though my joints, my muscles, ligaments, fascia — all were mysteriously released.” My fascia felt loosened, too.

Kettmann wonders: “How do we try to rebuild a society that helps people think for themselves a little more often? How do we encourage each other — and ourselves — to understand our neighbors a little better?”

He suggests spending less time on Twitter and having more conversations with real people. “We need to get better at talking to each other,” he writes.

But Angela Wright Shannon, a freelance writer, editor and actor, in her powerful essay, “For Me, It’s All About Kamala,” persuasively explains why she is “weary of the conversations about the need for more conversations, and how we need to try to understand each other better.”

I don’t believe we can preserve our democracy if we don’t restore respect for credible fact-based news and information. The president assaulted real journalism for four years and called reporters the “enemy of the people” without any effective rebuttal. We witnessed the cost in the “Murder the Media” message scrawled inside the Capitol and the accounts of terrified reporters who ripped press badges from their necks as the mob descended because they feared being identified and killed.

I want to go to counties that voted for Obama and then flipped to Trump and give everyone there a subscription to a quality newspaper. I want to arrange meet-ups between them and local journalists, so they can share their story ideas and understand the value journalism has for them.

But the Capitol riot crystallized that Trumpism isn’t only a bad information problem — it’s about idolizing a man who embodies bigotry. And fixing the media ecosystem alone won’t solve that.

“Let’s be clear-eyed: Racism is the cornerstone of Trumpism, as central to America’s civic fabric as it was at the nation’s founding,” writes Pulitzer Prize-winning columnist Cynthia Tucker.

The truth is, no one initiative will solve the scary mess Trump leaves in his wake. But books like this generate creative ideas worth considering.

Art Cullen, editor of the Storm Lake Times in Iowa, explains how Biden can reach rural voters who voted for Trump with policies that incentivize sustainable agriculture.

Susan Bro, mother of Heather Heyer, killed in Charlottesville during a 2017 demonstration against white supremacists, wonders if we could offer remedial classes in authentic history and civics “so people aren’t as gullible about vote-counting schemes? What perks could we offer upon passing the course — a tax credit, extra points on driver’s licenses, a free coffee with a pastry?”

Hussein Ibish, who fled the Lebanese Civil War in 1980, sums up our state of affairs with a sadly prescient prediction about the “potential for right-wing militia groups, many of which identify with Trump, to attack and potentially kill their fellow Americans.” But Ibish comfortingly argues we aren’t headed for civil war. “Those of us who have endured our societies melting down all around us … can safely say we’re nowhere near that, in fact. We’re not even close.” Phew.

There are no Trump supporters in “Now What?” But there’s a message for them, as articulated by book publisher and novelist Bronwen Hruska.

“My hope for them,” she writes, “is that they open themselves to the possibility that things can be better, calmer, more sane with Biden and Harris running things.”